“It seems, that the man is like good wine – the older he gets, the better he is!”

“Before I started listening, I never even considered the option, that this album would have such a big impact on me, but I have been listening to this album over and over again, and I keep finding new things which touch both my heart and my brain. In my opinion a masterpiece and thus far my favourite album released in 2010.”

“Taylor’s Universe is a project, that is as noticeable for its virtuosity in editing and engineering, as it is in musicianship!”

“This is one of the best bands active today in contemporary progressive rock!”
– PROGGNOSIS

“Robin Taylor is one of Denmark’s most innovative musicians!”
– Lee Henderson, PROGNAUT

“One of the best cutting-edge bands around!”
– EXPOSÉ

“Right now Robin Taylor, for me, is probably the most exciting composer out there!”
– THE ROCKTOLOGIST

“Taylor’s Universe are one of the most unknown and underrated acts on the prog/jazz-fusion scene!”
– ALL ABOUT JAZZ

“In my honest opinion, he [Robin] is undoubtedly one of the most inspired, inventive and innovative composers of the progressive rock movement!”
– Uffe Christensen, JYLLANDS-POSTEN 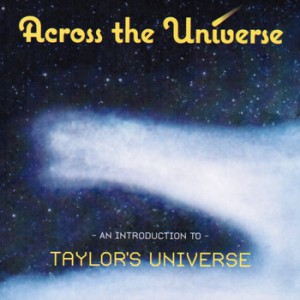 It’s always a great delight to have a Taylor’s Universe album cross my door.

Across the Universe – An Introduction to Taylor’s Universe is no exception to this statement. This compilation has been cleverly compiled and named and sees Taylor’s Universe presenting a nice collection of instrumentals from their latter period of work. The band could have quite easily just selected any number of tracks and put them out. But no, they have been slightly smarter than that, they have revamped, partially re-recorded, remixed and remastered the instrumentals presented here with the current line-up of the band. This approach serves as a great initiation to those unfamiliar with their work, and something new for those who are. “

“Robin Taylor, the band leader, has never ceased to entertain me, offering beautiful and emotional soundscapes that pull at the heartstrings, as they course the musical boundaries of jazz-fusion and prog rock. There are no overbearing 20-minute plus epics here, there is no need, as Taylor’s Universe can say it in a more succinct manner.”

“They hit the spot with every perfectly-placed note, whether that be with the modern jazz approach of album opener Salon Blue or Firestone with its hat-tipping homage to Genesis‘ Supper’s Ready. The excellence does not stop there, Days Run Like Horses casts its spell with its haunting Mellotron, smooth sax and guitar work to die for, which carries you along its journey. Fame, where the band venture into Gentle Giant and Mahavishnu Orchestra territory, is another great piece where the guitar work of Sund and Carvalho up the ante, complementing each other as their delivery emits from the speakers. Even when the piece becomes slightly quirky, the character of the piece remains confident, ensuring that it does not become too clever for its own good.”

“The atmospheric Tortugas, the longest piece on the album, travels a proggy space-rock path with its layered instrumentation, courtesy of Taylor, where it drifts and swirls, menacingly in the ether. Haunted Yellow House has a massive personality, along with album closer Mooncake, with its meaty guitar work and mini Moog tones. Add Firestone and you have the three standout pieces, without doubt, but do not let that detract from the rest of this stunning album.”

“People may have mixed feelings with regards to introduction albums, however, Taylor’s Universe have allayed these fears, proving that if you take the time and effort to get it right then you indeed do get it right. It also needs to be pointed out that that success of this approach is also down to quality. As a band of musicians and Taylor as a writing force, they have this, in abundance.”

“This is definitely an album to buy if you want to discover the brilliance of Taylor’s Universe; it does have elements of Genesis, Gentle Giant and Mahavishnu Orchestra, but cleverly remains original in its stance. This album will leave you hungry for more of their work, in which, I am positive, when you investigate further, you will not be disappointed. Insert the disk, turn the volume up and be prepared to be entertained.” 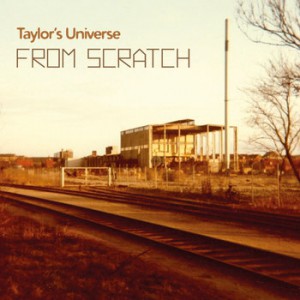 Making a new album that reflects new musical roads is starting from scratch, and to a degree, this is what the Taylor’s Universe gang have done with their latest album ‘From Scratch’. The ever-creative Robin C. Taylor rules the pathway for this band in a way that motivates freedom in an expansion of multiple musical possibilities, and now, bearing in mind that the sequence of the band’s previous four releases laid the ground of a golden age for TU, we can notice that this new album’s overall strategy is based on the drive to refresh things up.

This is a renewed manifestation of a golden age that doesn’t seem to know where to end. Good news, indeed! An interesting observation the album’s logistics: Taylor decided to restrain his guitarist’s role prominently in favour of Claus Bøhling (mostly), while he focuses on most keyboards, bass guitar and percussion, also some guitar and guitar effects here and there, of course, it’s a ‘must’ for him. Other stellar collaborators are sax/clarinet maestro Karsten Vogel, drummer Klaus Thrane, while Mr. Ulstrup brings some amazing, electrifying synthesizer solos in a few tracks.

Paying close attention to the album’s repertoire itself, we start by enjoying the lightful stamina of the opener ‘Other Meetings’, which bears a robust groove during the instalments of its main motif, a robust quality that becomes a bit more constrained during the passages where the guitar and the synth alternate solo spots. ‘Beta X’ manages to perpetuate the refreshment ethos on the album by displaying a weird and effective mixture of psychedelic art-rock and krautrock: a rhythmic architecture that emulates the mechanized structure of our modern society, eerie sax lines, a special richness of sound for the more extroverted moments, all these elements are craftily combined to cause a pleasant and unexpected listening experience.

After the distorted adornments of the ending section of ‘Beta X’ comes ‘Balcony People’, a track that may partially remind us of the sonic magic that was tremendously dominant in the previous release ‘Evidence’, but again the energy expressed in the alternating lead guitar and Mini-Moog solos remind us more closely of the opening track’s main ambiance. The epilogue of ‘Balcony People’ takes us to a spacey marriage of e-bow guitar shades and synth cosmic effects, plus talking voices (through a telephone line, perhaps?…)

With a 9 ‘ minute timespan, track no. 4 ‘Interrail’ is the longest piece in the album. This is the only track where Taylor plays all guitars, and while he’s at it, he also decided to play a second drum kit within the overall instrumentation. The recurring motif is candidly simplistic, easy-going in a way, but it also conveys a subtle air of dark tension that the ensemble manages to translate into something dreamy. Dreamy as if waiting for some indefinite nightmare to stir things up in the near future, but maybe it won’t. While Vogel’s amazing sax solos deserve a special mention, it is also notable how the choral efforts by Jytte Lindberg and Jan Fischer work as an essential element of the composition’s nuclear theme.

‘Für Louise’ is yet another demonstration of compositional genius, which relies importantly on the amazing syncopated groove created by the rhythm section. Finn Olafsson is the lead guitarists for this piece, while Jakob Mygind and Carsten Sindvald join Vogel in the sax section. Of course, that Mini-Moog solo near the end would have made Happy The Man’s hero Kit Watkins immensely proud, but this is TU, ladies and gentlemen. Just like ‘Other Meetings’ and ‘Balcony People’, the main theme of ‘Für Louise’ is addictive, so it is somewhat frustrating that the end feels too early.

But the album must go on and so it does with the floating soundscapes of ‘Autumn River’ the album meets its definitive epilogue: this closure is an exciting sonic portrait of restless river streams clouded by a thin autumn fog. Conceived as something like Hillage-meets-Fripp & Eno, this track features Bøhling’s exultant lines with Taylor elaborating powerful synth layers and elegant guitar phrasings. This is how the whole experience of ‘From Scratch’ turns out to be, yet another gem in the flawless discography of Taylor’s Universe, a band that keeps itself strong and healthy in the elite of contemporary Danish prog rock.

If nothing else, multi-instrumentalist, composer, and studio rat Robin Taylor is consistent. Stylistically, he’s done it all. His recordings-all self-produced and issued on his own Marvel of Beauty imprint – over the past two decades encompass everything from ambient soundscapes to free improvisation to straight-up hard rock. The past decade or so finds Taylor working exclusively with what can be termed instrumental progressive rock. Sadly, this sort of pigeonholing glosses over the fact that there’s a considerable amount of jazz-based improvisation in Taylor’s music. One could say that his tunes are essentially platforms for the solo flights of some of Denmark’s most remarkable improvisors; many of whom forged their own reputations in Denmark’s fecund progressive rock scene during the 1970s. Saxophonist Karsten Vogel and guitarist Claus Bøhling co-led Denmark’s best-known jazz-rock band, Secret Oyster, and saxophonist Jakob Mygind (ss/ts) and drummer Klaus Thrane were members of Coma, another memorable Danish prog outfit. The chemistry between these long-time musical associates and choice newcomers, such as Minimoog slinger Thomas Ulstrup, is readily apparent on Taylor’s latest creation, From Scratch.

While Taylor’s previous two releases Evidence, and Worn Out (Marvel of Beauty, 2013) were comprised of long pieces with extended solos that seemed to emphasize the jazz-rock aspects of his music, From Scratch mixes things up a bit, featuring shorter pieces and varied instrumentation. Clocking in at just under three minutes, “Laura’s Lullaby” is a pastoral gem with the always-substantial Vogel soloing eloquently over wordless female vocals (shades of The Northettes) and sweetly resigned piano chords. A multi-tracked duet with Bøhling (who does some truly amazing things with his six-string) the atmospheric “Autumn River” is cinematic in scale, as if Jeff Beck was crafting a soundtrack to the Hollywood version of your daydreams.

The remainder of the album consists of Taylor’s characteristically dark, episodic, riff-based tunes. “Beta X” briefly journeys into the weird as Taylor weaves an electronic spell around Thrane’s motoric drum figure and a dourly repetitive Hammond riff. Somehow this leads into a brief free improvised exchange between Vogel and Ulstrup before giving the young Moog specialist a chance to strut his stuff over a variation of the opening riff. “Balcony People” juxtaposes oddball drones and samples with Taylor’s trademark ultra- heavy prog stomp. With its opening drum solo and random guitar sounds over a suspended minor chord, “Interrail” hearkens back to Taylor’s free improvising days. The tune develops into one of Taylor’s more evocative pieces, with wordless vocals carrying the melody as Vogel, Ulstrup and Taylor solo in and around the swirling keys and pounding multi-tracked drums.

With From Scratch, Robin Taylor’s ability to conjure images with sounds continues to impress, as do the spontaneous creations of his comrades, Ulstrup, Vogel, and Bøhling.