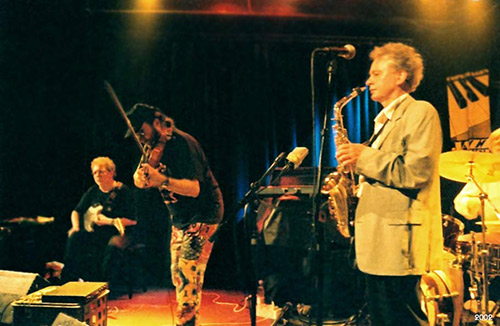 This group was based on the concept of playing totally improvised (free form) ‘jazz’ – with lots of electronics involved. Saxophonist Karsten Vogel and trumpeter Hugh Steinmetz (key figures on the Danish experimental jazz scene in the 1960’s) were both present in the original line-up of TFU in 2000 – but it wasn’t until 2001, that an altered version of the group premiered at an experimental festival, “Festival på Kanten”, in Copenhagen. Next was the recording of the group’s debut album, File Under Extreme, in 2002 – with an almost new line-up consisting of Robin (guitar, electronics), Karsten Vogel (saxes), Pierre Tassone (violin, electronics), Johan Segerberg (bass, electronics) and Kalle Mathiesen (drums, samples).

The three first mentioned stayed with the group until it dissolved in 2005. In the meantime, TFU had released five albums (three of them recorded live in concert), of which one was nominated for a Danish Music Award Jazz in 2003. TFU played gigs at the Copenhagen Jazz Festival, Aarhus International Jazz Festival a.o. Many players have been with the group during its short career, such as Kim Menzer (wind instruments), Peter Friis Nielsen (bass), Klavs Hovman (bass, electronics), Stefan Pasborg (drums), Lars Juul (drums, electronics), Peter Bruun (drums), Peter Ole Jørgensen (drums) and Jon Meinild (electronics). 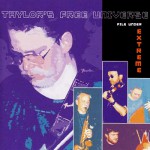 Danish guitarist Robin Taylor and his progressive/free-jazz band Taylor’s Free Universe have started to make a name for themselves, putting out a few releases of avant-garde, adventurous journey’s into the world of dark jazz. Similarities to Present, Univers Zero, King Crimson, David Torn, Terje Rypdal, and Ornette Coleman’s Prime Time can be heard throughout this near 50-minute live recording (recorded at the Soundscape Studio in Copenhagen January 2002), but this band takes more chances than any of those groups, and the results are a challenging yet exciting listen.

There are lots of different tones and colors throughout File Under Extreme. If you like “extreme”, you have the manic noise of “Free-Bop”, a metallic merging of jazz and metal, with Pierre Tasson’s frenzied violin solos giving way to Taylor’s distorted and tortured guitar blasts, which are busily doing battle with Karsten Vogel’s saxophone shrieks, all while the rhythm tandem of Johan Segerberg (bass) and Kalle Mathiesen (drums) pound away furiously. Shades of Lark’s Tongues in Aspic can be heard on the dark and menacing duo of “Germanism” and “More Germanism”, complete with brooding electronics, feedbacked guitars, and spooky violin lines. Things get a little funky on the upbeat “Age Concern”, a more typical jazz piece featuring repetitive loops, melodic sax work, deep bass grooves, and nimble percussion. Taylor’s guitar solo here is dripping feedback and sustain as he tugs on his whammy bar for additional shrieks and howls. If you dig a more meditative, atmospheric style, perhaps “Less is More” will be more up your alley, an ominous piece that slows things down considerably and is a forum for Tassone’s violin passages. Or, if complex and aggressive prog with a jazz kick is your bag, then I recommend “Evaluation”, a whacked out number that throws serious feedbacked guitar lines, squonking sax, and gymnastic rhythms, into a smoldering cauldron of sounds. Another winner is the sax vehicle for Vogel titled “Aspects of a Myth”, an atmospheric number that is as spooky as it is appealing.

There are many CD’s floating around these days from bands that pretend to know how to play “free-jazz” mixed with prog rock. Taylor’s Free Universe are no pretenders. This is the real deal folks – check it out. While not for the faint of heart, File Under Extreme will bring a smile to the face of any listener whose passion lies in the dark and dissonant.